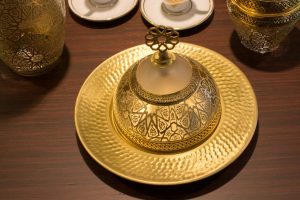 Ottoman cuisine is a delicious and unique blend of Turkish, Middle Eastern, and Western influences. It has been influenced by the empires that have ruled over it, such as the Ottoman Empire, Seljuk Sultanate of Rum, Byzantine Empire, and many others. One could provide an anthropological examination as to why the Ottoman dishes are so … Read more

First published: January 14, 2014 – Updated: September 25, 2021 For Turks, the look of Turkish coffee is just as important as its taste. And the most desirable is one topped with foamy ‘bubbles’. It is true that everyone should know how to make Turkish coffee in Turkey. Related content: Turkish Drinks: 10 Popular Beverages … Read more

More than a few visitors leave Turkey with the taste of delicious Turkish tea fresh on their palates and, more than likely, with a box or two of tea to make in their own houses. What is a good recipe for authentic Turkish Tea? To brew Turkish tea you don’t need to be a master … Read more

Originally published May 18, 2013, updated September 12, 2021 Soup or ‘çorba’ is an integral part of the Turkish meal plan. Served as a prelude to most lunches and dinners – or as a light meal on its own – Turks have certainly mastered the art of cooking this local favorite. This is lucky for … Read more

Originally published May 3, 2013, updated September 12, 2021 Ezme is one of the most popular Turkish mezze and is found at almost all Turkish meals. It is a spicy and fresh accompaniment. Actually, this ezme recipe is very spicy, so you could opt to tone it down a little depending on your taste – … Read more

Originally published May 3, 2013, updated September 12, 2021 Stuffed pepper is one of my favorite Turkish dishes and I didn’t realize how easy it was to make Turkish dolma until I tried it for myself. Of course, as I am a carnivorous person, I do prefer the dolma containing ground beef. You can serve … Read more

Originally published May 3, 2013, updated September 12, 2021 Semolina halva or irmik helvasi is a classic Ottoman dessert and Turkish people have been cooking this dessert for centuries in their houses. Sometimes semolina halva is cooked with milk, sometimes with pine nuts but it is always a very light dessert. Semolina halva (irmik helvasi) … Read more

First published on 2nd February 2014. Updated on 1st September 2021 For most people, thinking about Turkish cuisine generally conjures countless images of delicious meaty kebabs in mind. But for the most part, these imaginings are limited to the standard döner kebab and shish kebab that the western world are accustomed to. But in fact, … Read more